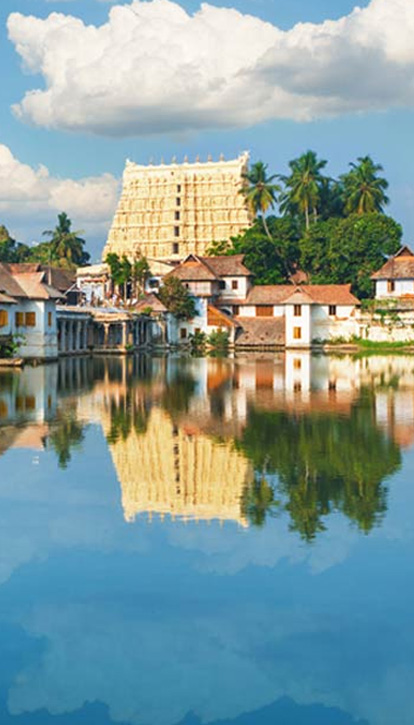 Thiruvananthapuram (Trivandrum) is the capital of the Kerala. Located at the South Western tip of India, it is bordered by the Arabian Sea in the West and Tamil Nadu in the East. The name 'Thiruvananthapuram' can be split into thiru-anatha-puram, which means "the seat of the sacred snake-god 'Anantha", on whom the God Vishnu, the protector, is believed to be reclining. The Britishers found the name too long to handle, so it was anglicized to 'Trivandrum'. The city is built around the very famous Sree Padmanabha Swamy Temple which is the family deity of the royal family.

Thiruvananthapuram is one of the most peaceful and serene cities in India. The city was built on seven low hills. It has an interesting mix of commercial streets, tree lined avenues, historical and modern buildings and a long coast washed by the Arabian Sea. With so many heritage sites and scenic places, cultural promotion and commercialization, the city is truly the cultural capital of Kerala and a very interesting place on Kerala's tourist map

Climate/ Best Time to Visit : Thiruvananthapuram has a tropical climate with shades of heat and cool and good rainfall being the entry point of the southwest monsoon. Consequently, humidity is high with temperature ranging between 22 C and 32 C. The best time to visit Thiruvananthapuram would be between November and February

Good to know : It is interesting to note that the imperial emblem of the Ay Kingdom was the elephant and a conch was added to this to make the royal emblem of the Travancore Family. Interestingly the Kerala State government continues to use this Royal Insignia with minor modifications as its official seal.

As traditional home of the Royal family of Travancore. Built during the 15th century, it was known as 'Kalkulam Fort' which was made up of mud. During King Ayilyam Thirunal Marthanda Varma's reign, it was demolished and a granite fort was built in 1744. The Padmanabhapuram Palace has the traditional Poomukam, Oottupura, Navarathri Mandapam, Homapura and so on. This composite complex is also an archaeological museum

The incredible fact of this temple is that it is built in 'one single huge stone' with beautiful architecture in it, which is truly unbelievable. Being the capital of the state, it is the centre of power with the secretariat and government offices situated in the centre of the city. At the same time, the temple of Lord Padmanabha Swamy lends a distinct spiritual and royal air to the city as it is the presiding deity of the royal family. The temple has a grand structure which made the devotees believe that it guarded the city from all ill-omens. Words fail to describe the marvel of the idol of Lord Shri Padmanabha Swamy. The temple has witnessed the history, the rise and fall of monarchs, the great ThrippatiDanam deed, and houses the largest collection of palm leaf manuscripts and still stands proudly shielded safely with the strong faith of countless devotees.

Former known as the Kuthiramalika palace, this architectural marvel was built by the Maharaja Swati Thirunal Balarama Varma who was a renowned statesman and social reformer besides being a talented poet and musician. The palace museum displays paintings and priceless collections of the royal family.

The museum complex set amidst beautiful botanical gardens and parks in the center of the city houses the Sree Chithra Art Gallery, Panicker Gallery, Napier Museum, Natural history museum and zoo. This is the best place to get a glimpse of the cultural heritage of Kerala.

Napier museum is the oldest museum in Kerala and gathers an extensive collection of stone and bronze sculptures and carvings from wood from the 11th to 18th century along with artifacts from Asian countries like Java, Sumatra, Bali, Indonesia and Sri Lanka etc. The wooden chariot, Lamps and traditional ornaments of Kerala women, Kathakali figures and costumes and a model of the famous Guruvayoor temple are the things to be looked out for here.

Situated in the heart of the city, SreeChithra Art Gallery and the SreeChithra Enclave is a treasure trove. The Art gallery and the enclave are dedicated to the lives, hardships and enriching contributions of the royal family of Travancore with the evolution and progress of the state of Travancore geographically and historically. The first exhibits were the paintings of Raja Ravi Varma and over years many more paintings have been added.

The Panicker gallery was established to display works of the eminent artist K.C.S Panicker who credited us with the establishment of the Cholamandalam Artists Village in Chennai. He was nominated as one of the nine eminent artists of India and was made the member of the Lalita Kala Academy in New Delhi. Panicker was a trend setting artist. The works showcase the versatility of this artist.

It is an enchanting place which mesmerizes you with its marine charms and godly power. This picturesque landscape is located 54 km north-west of Thiruvananthapuram (Trivandrum), This is the best place along the Kerala coastline where you can see the sun like a golden ball that sinks into the sea. It is the only place in southern Kerala where one can find cliffs adjacent to the Arabian Sea. These cliffs have a unique geological feature, that is why it is known as "Varkala Formation" as recognized by the Geological Survey of India.

Thiruvananthapuram also boasts of its very own beautiful and pristine beach, the Shankhumugham beach, an ideal place to come with family and friends for relaxation and viewing lovely sunsets. The evenings are fun filled, as people gather here to relax and vendors sell snacks and assorted wares. There is also a very interesting indoor sports centre to visit which is built by the royal family of Travancore without any supporting pillars, an amazing architectural feat.

It is one of the most well-liked tourist destinations in demand. It is located 16 km to the south of Thiruvananthapuram. It is an hour trip from Trivandrum to this scenic beach. This beach is divided into three – Eve's beach, Samudra beach and Lighthouse beach. The Eve beach is a crescent shaped beach decorated with palm trees. The natural serene beauty of this beach enchants visitors from all over the world. It is considered as one of 'the world's best bathing bay'. It is famous for its beach resorts because it offers supreme facilities like sunbathing, swimming and especially Ayurvedic spa with variety of massages and other services. Kovalam is also considered as the second best beach destination in India after Goa.

Neyyar Sanctuary has huge natural vegetation thriving due to the presence of the Neyyar River and its tributaries. A rich variety of medicinal plants, tropical greenery ideal for trekking, wildlife and a paradise for bird watchers as the presence of migratory and non migratory birds is very high.

Veli is a picturesque area where the lake Veli merges with the Arabian Sea with a small stretch of beach formed in between the lake and the sea. The open air auditorium which has the sea as its background provides a venue for cultural performances and art festivals.

Thenmala which means honey-hills is India's first planned ecotourism destination. Located at equal distance (2 hours by road) from both Kollam and Thiruvananthapuram, at a height of 500m above sea level, Thenmala's natural canvas of flora and fauna and vast tracts of forests attract adventure seekers and nature lovers with equal vigour. The destination is planned with minimum damage being done to the fragile ecosystem of the area. Musical fountains, elevated walkways, mountain biking and boating are some of the activities that can be arranged here. You can also purchase a sapling relevant to your birth star at the Nakshatravanam over here. You could also take a visit to the deer rehabilitation center here. Thenmala offers everything to have a whale of a time.

It is believed to be the palace where sage Agasthya meditated in total solitude. Part of the Sahyadri mountain range, Agasthyakoodam, in the Western Ghats is the second highest peak after Anamudi and rises to the majestic height of 1890m in the form of a sharp cone. These mountains have tribal settlements, rare birds and rare medicinal plants which are protected and therefore a visit permit is necessary to enter. Women are not allowed here and trekking season is from December to February.

Thiruvananthapuram is blessed with beaches, parks, wildlife sanctuaries, heritage sites and places of religious importance, and with the political importance of the city as well. The beauty of reaching one's destination is the route. While traveling to Ponmudi, there is a trail that leads to Meenmutti waterfalls, which are formed where the river Kallar falls from a height. There is a striking lagoon at the bottom of the falls for one to swim and enjoy a picnic. Ponmudi has a variety of flora and fauna too; scenic landscapes and paths leading through the woods, spice plantations, the perfectly terraced tea plantations are all a sight for sore eyes.

The city and its outskirts house some of the World's best Ayurveda centres and spas. The therapy will leave you rejuvenated and fresh in body and spirit.

Thiruvananthapuram city being the cultural capital of Kerala houses many monuments and museums of cultural significance. It is your best shot at getting a glimpse into the glorious past of Kerala.

Kathakali performances (the traditional drama-dance form of Kerala) are organized by the resorts and hotels here is also an attraction for tourists. The programs are organized in the evenings starting with make up sessions.

By Air: Thiruvananthapuram international airport is just 6 km south of the city. Thiruvananthapuram, being the capital city of Kerala, has a very good air network and is connected to Delhi, Mumbai, Goa, Chennai, Kochi and Kolkata.

By Rail: Thiruvananthapuram railway station is an important rail head in the Southern Railway system. The city well connected by rail to all major cities in India.