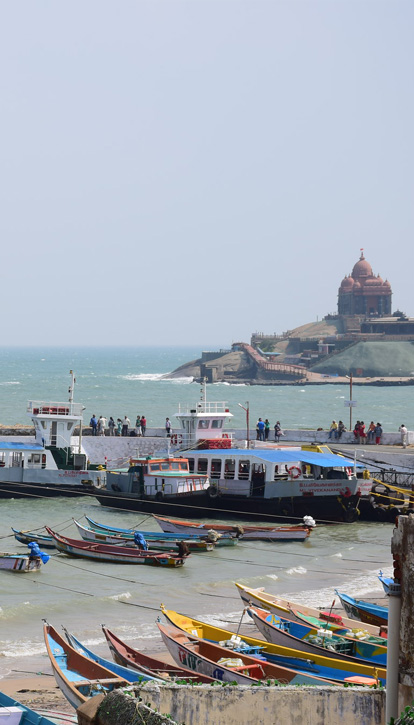 The ‘Land’s end’ of India

Kanyakumari, the southern most tip of the Indian peninsula is the confluence point of 3 water bodies – The Indian Ocean, The Arabian Sea and the Bay of Bengal. This land of unparalleled natural splendor offers a feast to the eyes with its exquisite beaches of multi-colored sand in the company of verdant palm trees, Romantic sunrise and sunset and a brilliant story of Indian heritage to tell.

Kanyakumari has a great experience of offer in the form of a breath-taking sunrise and sunset besides being the only place in India where we can see the moon rise and the sun set on either side of the horizon (Pournami day). Don't miss this unique combination of natural beauty and heritage on your trip down south.

Climate/ Best Time to Visit : The climate is humid with temperature ranging from 30 C to 35 C. Kanyakumari is a round the year destination and its beaches and heritage never go out of fashion.

Good to know : The sparkling diamond nose ring of the Kanyakumari Devi deity is said to be visible from the sea.

This memorial was built in 1970 to honour Swami Vivekananda, the great spiritual leader who brought Indian spirituality to world fame. It is said that Swami Vivekananda swam to this rock and meditated for 3 days on it. He is supposed to have gained enlightenment on this rock and hence became a social reformer and philosopher. The rock is of the shape of a human foot and is believed to be blessed by Kanya Devi. The memorial has a statue of Swami Vivekananda and a meditation hall for visitors. The mandapa design incorporates different styles of temple architecture all over India.

This imposing 133ft tall statue of Tamil poet and saint Thiruvalluvar was commissioned in year 2000 on a small island close to the Vivekananda Rock. The uniqueness of this statue is a slight bend around the waist which reminds us of ancient Indian gods like Nataraja. This challenging design was sculpted by Dr. V. Ganapathi Sthapati with the help of 150 workers. It is designed to withstand earthquakes of high magnitude and it withstood the Tsunami in 2004. Thirukkural is supposed to be the greatest work of Poet Thiruvalluvar. The 133 ft height of the statue denotes the 133 chapters in the Thirukkural.

This temple is the abode of the virgin goddess Devi or Adiparashakthi (an incarnation of goddess Parvati) and is a symbol of Sanctity. The story goes that Parvati was set to marry Shiva over here but as he failed to show up on the wedding day, Parvati decided to do penance and remain a Kanyaka. The legend goes that the uncooked grains of the wedding day turned into stones with time. Coincidentally you get to see rice shaped stones in Kanyakumari. The festival time at the temple is Chithra Pournami day (in April) when we can see the full moon rise and sun set at opposite sides of the horizon simultaneously. Navarathri is also celebrated with great vigour over here.

This memorial was built in 1956 at the place where the great Mahatma Gandhi's ashes were kept for public viewing before immersion. The specialty of the design of this memorial is that on October 2nd (Gandhiji's Birthday) at 12 noon sun fall on the exact spot where the urn containing Gandhiji's ashes were kept through a hole in the roof. The Mandapam is designed on the likes of many traditional Orissa temples. Inside the memorial there are photo gallery showcasing the life and times of Mahatma Gandhi.

Within a radius of 30km there are around 5 beaches in Kanyakumari like Chothavilai, Sanguthurai, Muttom, Vattakottai and Thengapattinam. The beaches at Kanyakumari come with the entire paraphernalia like horse rides, curio shops and a breathtaking view of sunset. However overcrowding at these beaches is an issue and deprives the visitors of the quietude one would associate with beaches. The tsunami memorial built in memory of the 12,500 Indians who lost their life in the 2004 Tsunami is also worth visiting.

This is one of the most cherished activities at Kanyakumari. It is considered an experience of a life time watching the night changing bit by bit into various ranges of colours and sun rising above the horizon in the Bay of Bengal. The sun sets are equally awesome.

Kanyakumari offers numerous avenues for shopping on the like of the Government emporium. Sea side shops sell sea shells, handicrafts, palm leaf items and packs of coloured sea sand.

By Air: Kanyakumari does not have an airport of its own; the most convenient airport is Trivandrum is nearly a 2 hour's drive from here. Trivandrum, being the capital city of Kerala, has a very good air network and is connected to Delhi, Mumbai, Goa, Chennai, Kochi and Kolkata.